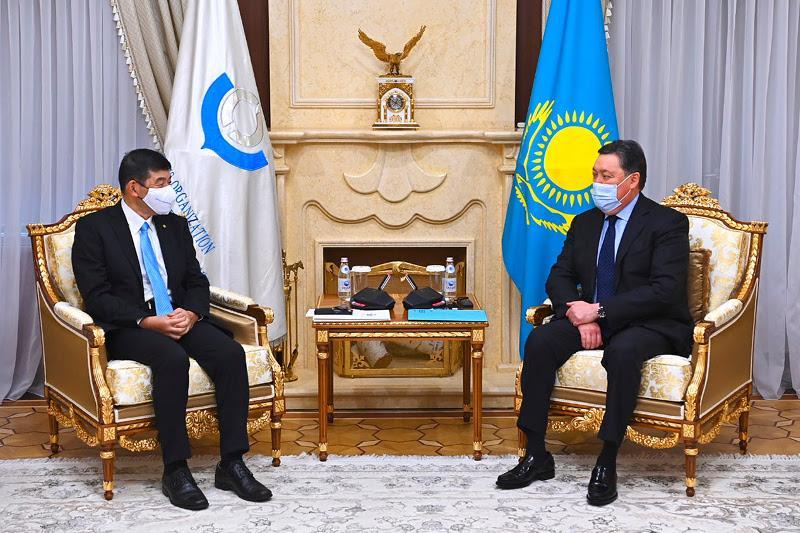 The meeting focused on increasing the transit potential of Kazakhstan and its further integration into global transport corridors, implementing international standards on simplifying trade procedures, ensuring the safety of the international supply chain and improving tariffs and taxes.

The head of the Kazakh government stressed that in order to increase the country’s transport potential in line with WCO standards, the new Nurly Zhol crossing point along the Kazakh-Chinese border was built, the crossing points B. Konysbayev on the Kazakh-Uzbek border and Kordai on the Kazakh-Kyrgyz border have been improved.

Nine road crossing points and one rail crossing point are planned to be upgraded by 2024, resulting in an eight-fold increase in throughput and a reduction in border crossing time.

Mikuriya highly praised the reforms in the customs and tax areas, measures to modernize border crossing points, the formation of the national distribution system and the development of cross-border trade infrastructure in Kazakhstan.

During the past three years, the WCO has sent 12 technical missions to Kazakhstan as part of the work aimed at implementing the main international conventions in the field of import-export operations. Five other missions on improving the Kazakh transit potential and simplifying trade procedures are planned for 2022.

As part of his visit, the Secretary General of the World Customs Organization paid a visit to the airport in the city of Turkestan and to the modernized B.Konysbayev crossing point on the Kazakh-Uzbek border.

Britain to threaten to remove Brexit conditions from Northern Ireland

Dear Penny: How do you get a credit score after 30 years in prison? | pennyhoarder

Attīstībai/By! politicians may be involved in bribe extortion case – Baltic…